We have just come out of our sprint 6 review feeling positive but tired, and are now taking a break from delivery sprints for 4 weeks. This will allow some people to have holidays, and some to catch up with other work and generally pause before we get stuck into another 4-5 delivery sprints from mid-August. It is really very hot in the UK right now, and I think most of us are looking forward to a little break.

As usual, we defined a number of sprint goals at the start of the sprint to help focus our efforts. We'll provide a short update on each of those goals below, but first a quick update on the base theme.

Somehow this was not one of our sprint goals, which is odd, as the hard work put in by Mark Conroy and the LocalGov Base Theme Working Group is starting to pay off. The working group has now completed its initial aim of delivering the localgov_base theme with feature parity to the original (soon to be deprecated) localgov_theme. Cumbria and Croydon councils have both been making great progress on their respective child themes of said base theme, which is great validation of this approach.

Mark live-streamed a demonstration of creating a child theme from the localgov_base theme, which is up on YouTube here: https://www.youtube.com/watch?v=41Y-Dd4aJFQ

Meanwhile, Maria and Dan have been performing a detailed accessibility audit of the localgov_base theme, which is performing so well that the audit got a bit boring at times! It is really good to know we'll be helping to reduce barriers to delivering accessible content. 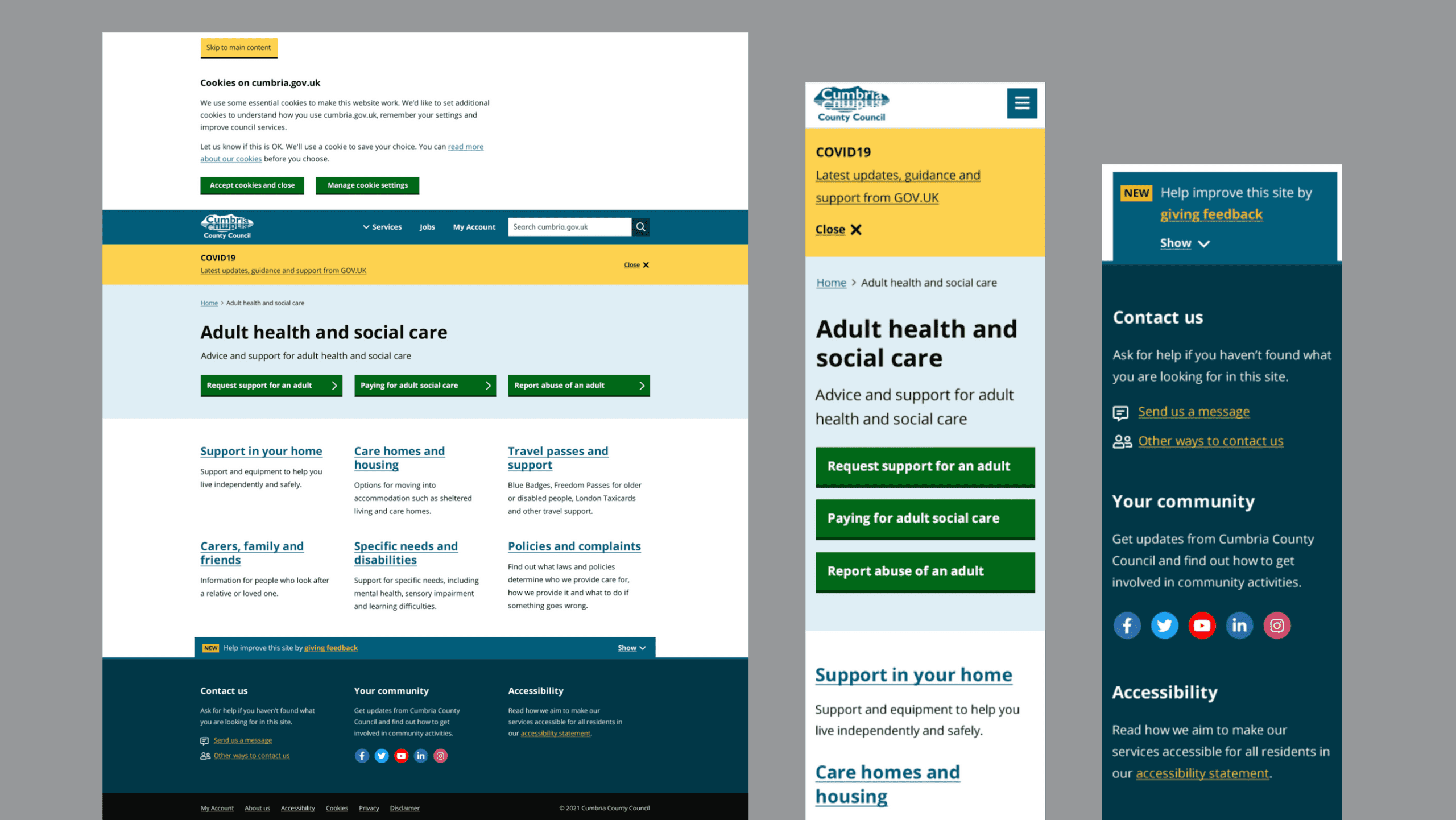 Cumbria have made rapid progress on their theme thanks to the work of the localgov_base theme.

1. Finish the Phase 1 interviews with existing users, including developers [done!]

We think we are there! We’ve completed three developer interviews and we’re happy with that for now. We had hoped for five, and will certainly do some more developer interviews in the future, but developer availability has been a challenge. Also, whereas the content designers and product owners were quite clearly defined groups, it is interesting to note that the developers are wide-ranging, some work in-house at councils, some at agencies, some are more front-end, and some more back-end; so ultimately we might want to speak to a wider range of developers to continue to gather insights. There are lots of new councils coming on board with new developers, and it will be really good to speak to some of them in a month or two once they've got into the project a bit more.

The interviews are all summarised and anonymised… here:

2. Finalise the script for the Phase 2 interviews (people new to the project) [done!]

The second phase of our research is to interview people from councils who are not yet using LocalGov Drupal, but might do in future. The script for these interviews is ready and we have two lined up for the coming week, with up to five planned over the 4-week sprint break. The research strand will continue to tick over during the break with further interviews and a synthesis of the surveys and interviews to date. This will feed into the governance and sustainability plan and provide important evidence to support our model for sustainable growth.

One noteworthy point that has already come up in the survey is an interest in LocalGov Drupal provided as Software-as-a-Service (SaaS). Until now there has been no evidence of any appetite for a hosted SaaS solution, so we will need to dig deeper to find out how big that appetite really is!

3. Finish the initial analysis with an early report on research from phase 1

We didn't score this one, as more work was going into the interviewing and summarising and anonymising the interview notes. All initial summaries are finished and we're starting on the early report, now due to be delivered for internal consumption at the start of the next sprint in mid-August.

Close, but no cigar. (Where does that saying even come from?)

The LocalGov News documentation was merged (see https://localgovdrupal.org/features/news/) but the alert banners documentation is still in flight. Dan has valiantly offered to get it finished over the next couple of weeks. We noted that writing documentation requires a particular headspace and sometimes you can't just turn on the tap. If you happen to find that headspace, please jump in and help Dan at https://github.com/localgovdrupal/docs/tree/feature/52-alert-banners

This is an interesting one from my perspective. After observing a number of meetings and interactions, Aaron made some initial recommendations to improve the governance of the project towards a more sustainable and scalable model. One key suggestion was to set up a steering group to oversee governance and act as a central point of co-ordination; a role that has largely been performed by Will and me (Finn) up until now. We're focussed on delivery but also try to spot gaps in the functioning of the community and make the best decisions we can. Relying on two people is clearly not sustainable, scalable or particularly transparent, so establishing a LocalGov Drupal Steering Group (or perhaps Steering Circle?) is an important step towards better transparency and accountability and clarifies what decisions we need to make and what we need to delegate. It will also allow us to co-opt (or elect) representatives to the group to increase wider representation and share the load as we grow.

To this end Finn, Will, Tim, Michael and Maria met to develop a first draft of the aim and domain for the steering group. This all felt a bit meta: where do we start, and who should be making the initial decisions? We also tried to work out if this ‘steering group’ is the interim group for this phase of work or if we are trying to start something for the longer term. We decided we needed more representation from councils and invited leads from each of those councils that are most involved at the moment to comment and join the initial steering group. Our draft aim and domain document is available for review and comment. We plan to meet again soon to agree this for now, following the spirit of "good enough for now, safe enough to try".

Update: we met today and agreed the aim:

“Ensuring the growth and sustainability of LocalGov Drupal’

We also amended and agreed the domain, acknowledging that there is lots more detail to think about and that we can iterate as we proceed. Exciting times!

We now have default publishing workflow optionally available on a fresh install of LocalGov Drupal. The localgov_workflows module provides default workflow states, transitions and permissions for the default roles of author, editor and contributor. The specification for this work came out of the sterling efforts of our first working group, the Content Publishing and Workflow Working Group. This was led by David Siddall (Waltham Forest) with lots of input from Oliver Hannan (London Councils), Ben Hills-Jones (Croydon and Cumbria), Tom Steel (Croydon), Maria (Agile Collective) and Stephen (Agile Collective). Stephen has been building out the functionality and liaising with the group on testing.

Following a reasonable suggestion from Andy Broomfield (Brighton and Hove), we split the module out to its own project to ensure the dependences remain optional.

The latest release of LocalGov Drupal profile now includes the localgov_workflows project, which is a culmination of a great effort on multiple fronts.

There is still some work to be done, so we are expecting the working group to come back together before the next sprint in August to confirm the requirements for the content review process, setting a date for content to be reviewed, and adding a dashboard to help content designers review content that hasn't been reviewed for a given number of months.

Last but by no means least, Ekes has been working hard on the complex task of integrating the LocalGov Drupal directories feature with the Open Referral UK standard. To cut a very long story short, he's done it and it works. He has also written a lovely (long) blog post to explain what it does and how it does it.

Read all about it at https://localgovdrupal.org/blog/openreferral.html

It has been a whirlwind 6 sprints: we've come a long way, and we've got a long way to go. A break will be good to allow people to reflect and come back with fresh ideas in August ready for another 4-5 sprints with a focus on growing the LocalGov Drupal community.