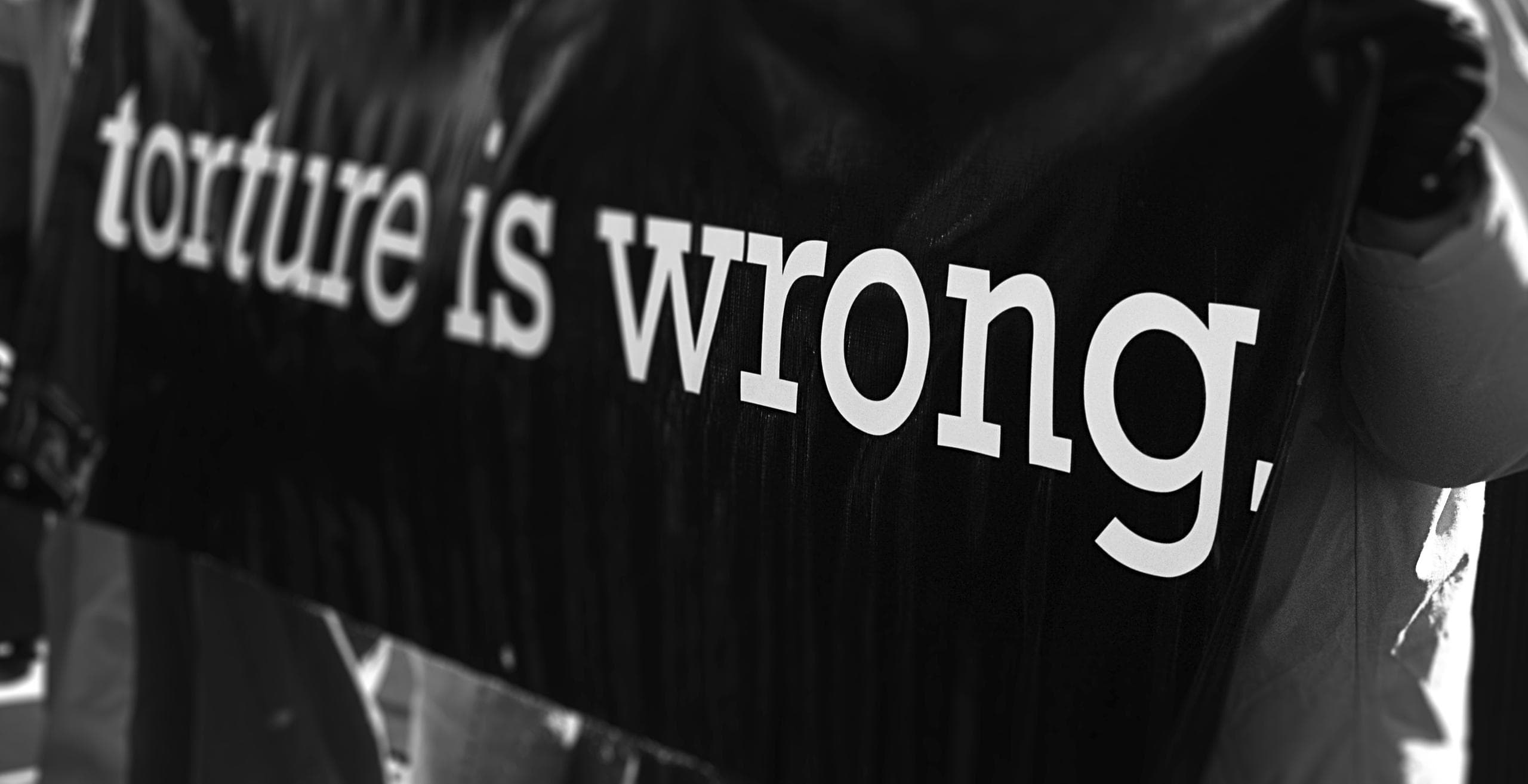 Freedom from Torture provides specialist psychological therapy and support to help asylum seekers and refugees who have survived torture in the UK. Alongside survivors of torture they also campaign for change in the UK and across the world, raising awareness and influencing decision-makers about torture and its impact. In addition, they provide training for professionals working with torture survivors.

Freedom from Torture had just finalised a three year strategy for the organisation aimed at significantly increasing their impact, and as part of this process had just completed a redesign of their logo and visual identity. Next up was the redevelopment of their old website which had grown organically over time and was no longer reflecting the organisation. 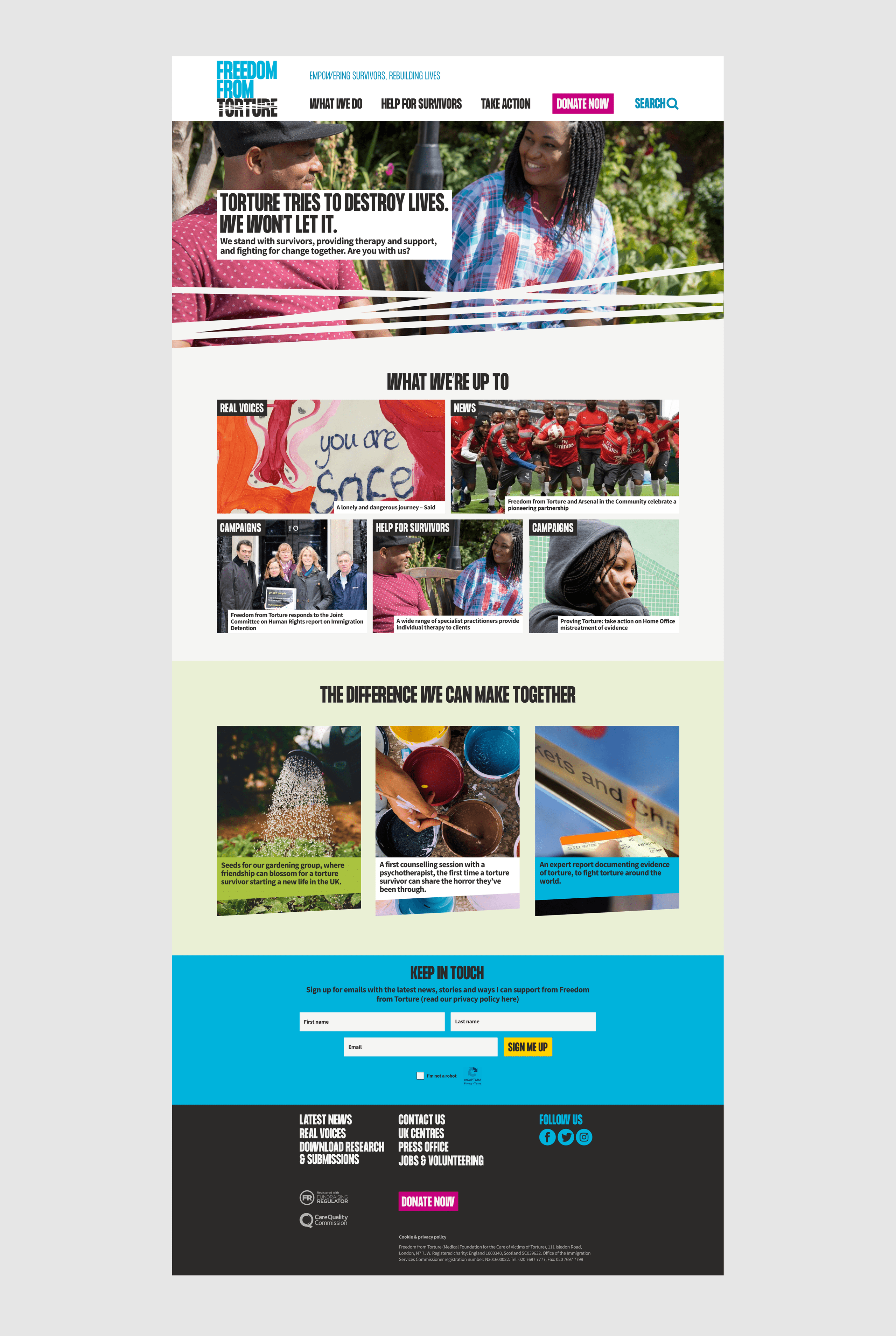 Freedom from Torture needed their website to showcase and evolve the new and bold visual identity that they had just developed. At the same time, they also required a consultation phase to reassess the needs of their audiences, as well as a content management system that vastly simplified the editing experience.

Doing this all in six weeks at the start of the year was no mean feat - especially as annual leave for all key personnel made scheduling tricky. However, the team of six from Agile Collective and Freedom from Torture quickly bonded and, by keeping the priorities in mind throughout, we efficiently produced research reports, designs and specifications ready for the start of the build phase. 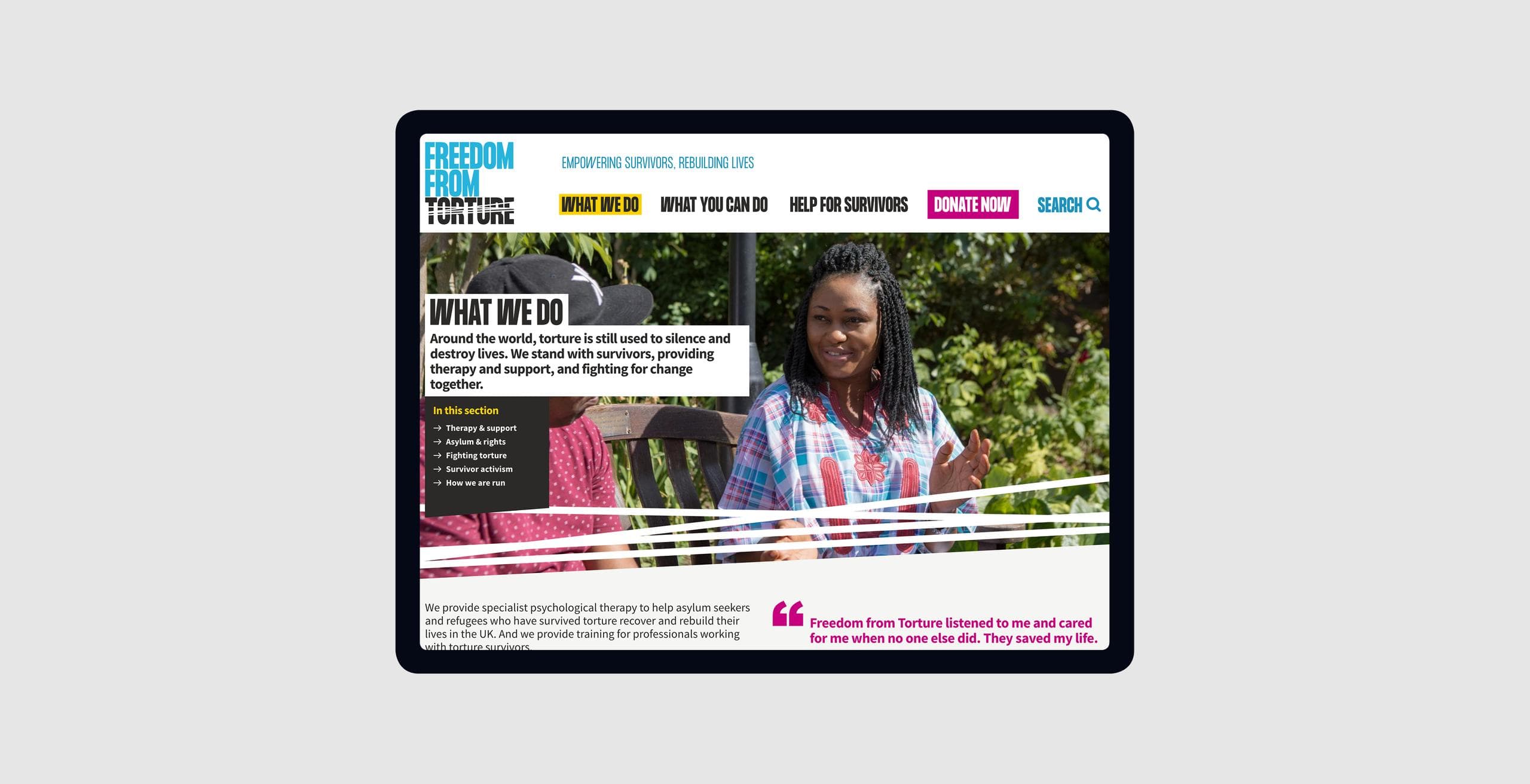 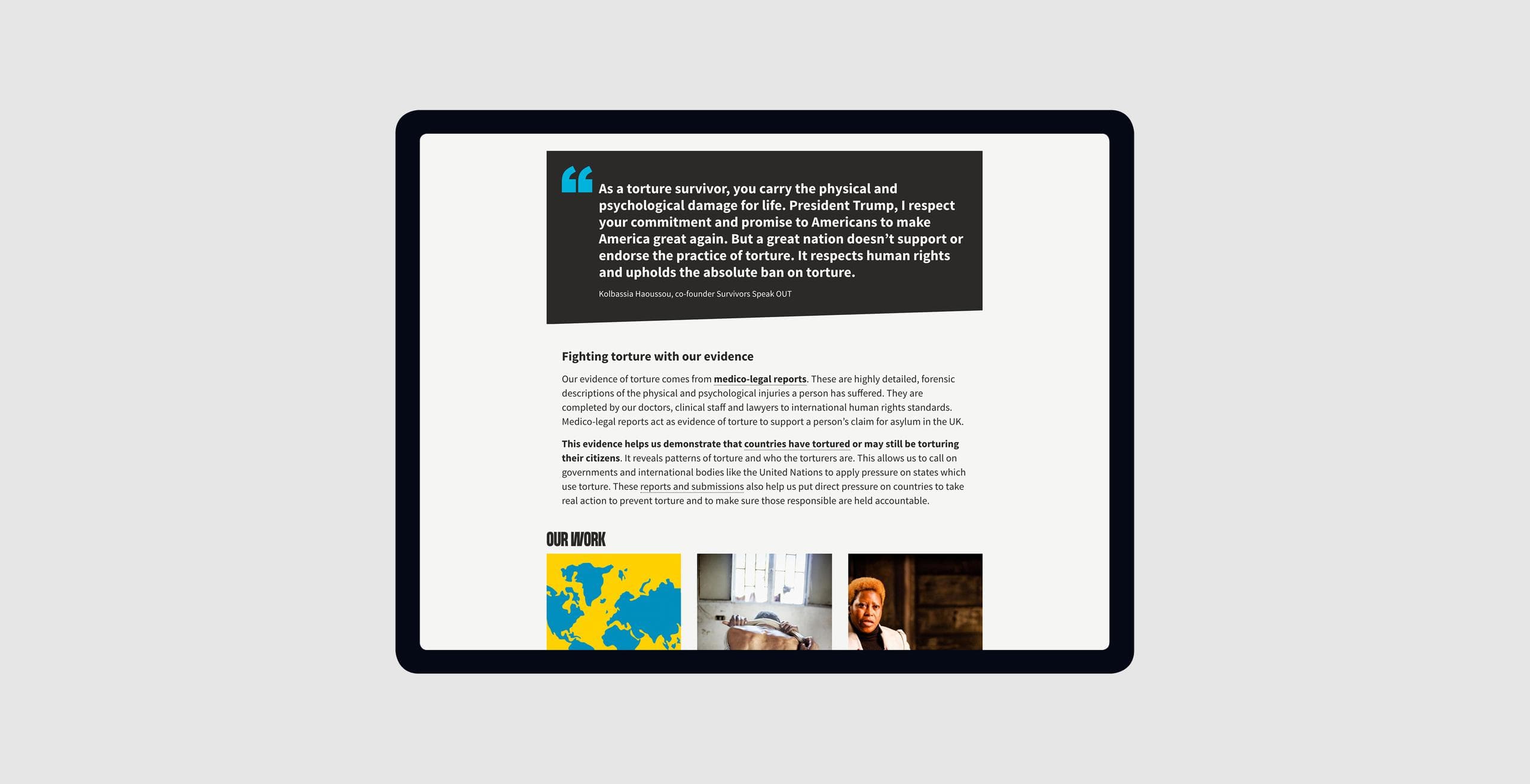 The greatest challenge throughout was balancing the need for strong messaging with a desire to reproduce some of the technical complexity and bespoke solutions on the previous site. There was no single solution to this. We helped move some systems such as the shop and events onto third-party platforms, providing the most appropriate solution to each problem. Other features, such as a form containing sensitive information and integrating with a separate database, were treated as a separate mini-project within the larger.

Most significantly, we worked extensively on the information architecture in order to ensure that all of the site’s audiences – including journalists and politicians, survivors and supporters, as well as editors and others from within the charity – were quickly directed to the content they needed whilst being made aware of the other aspects of Freedom from Torture’s activities.

The site launched in the spring of 2019 alongside the launch of the new identity and marked a significant shift in Freedom from Torture’s communications. The upgrade to a lean Drupal 8 site has also significantly reduced the overhead of maintaining the site, while the new design has led to staff promoting the site more than before.

We are now supporting the site on a long-term basis and look forward to evolving it as some of the wider initial research we conducted leads to further changes in the future.

We are proud of our association with Freedom from Torture – knowing that our work has a direct impact on the delivery of support to the victims of torture and helps promote the end of torture by governments was a clear motivating force throughout. 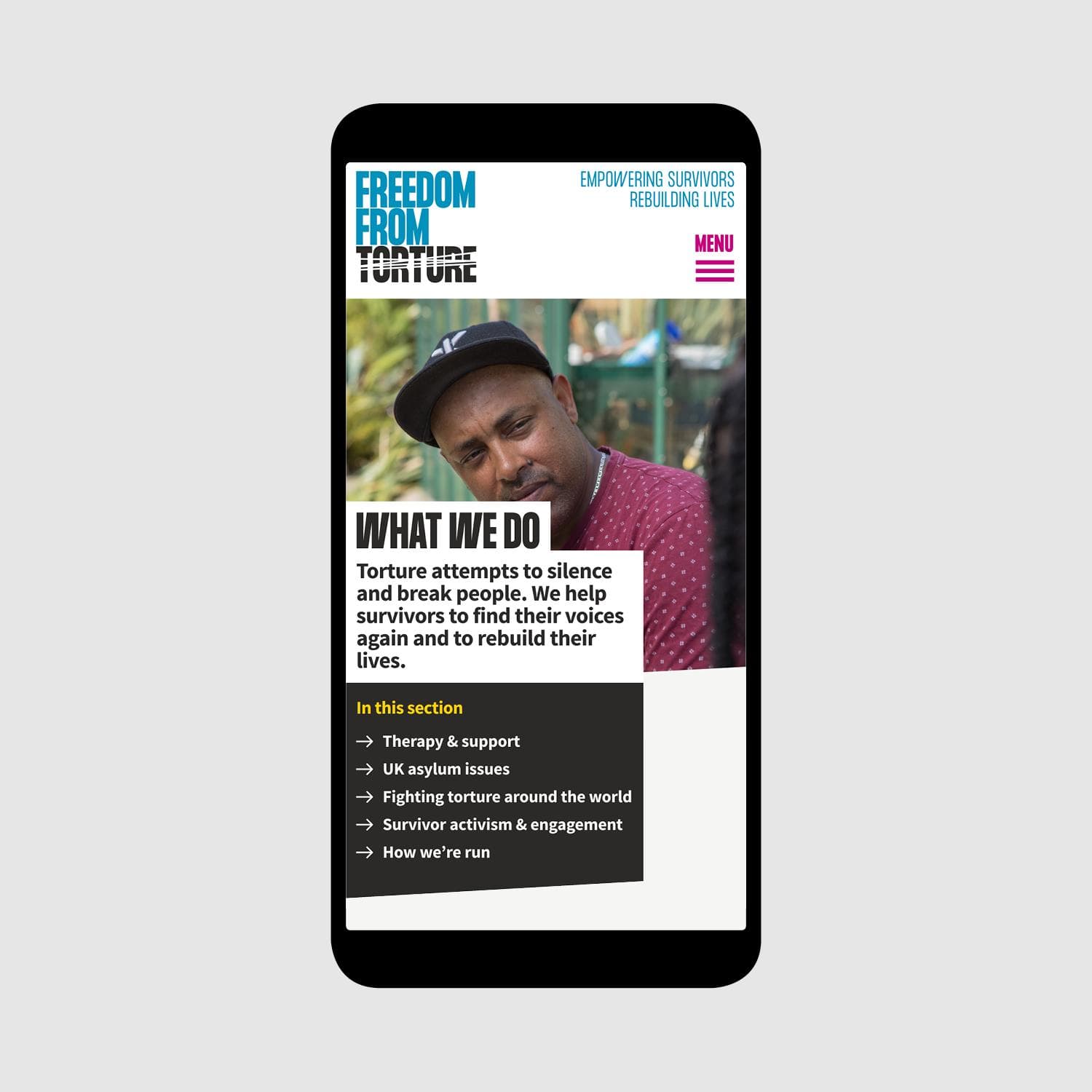 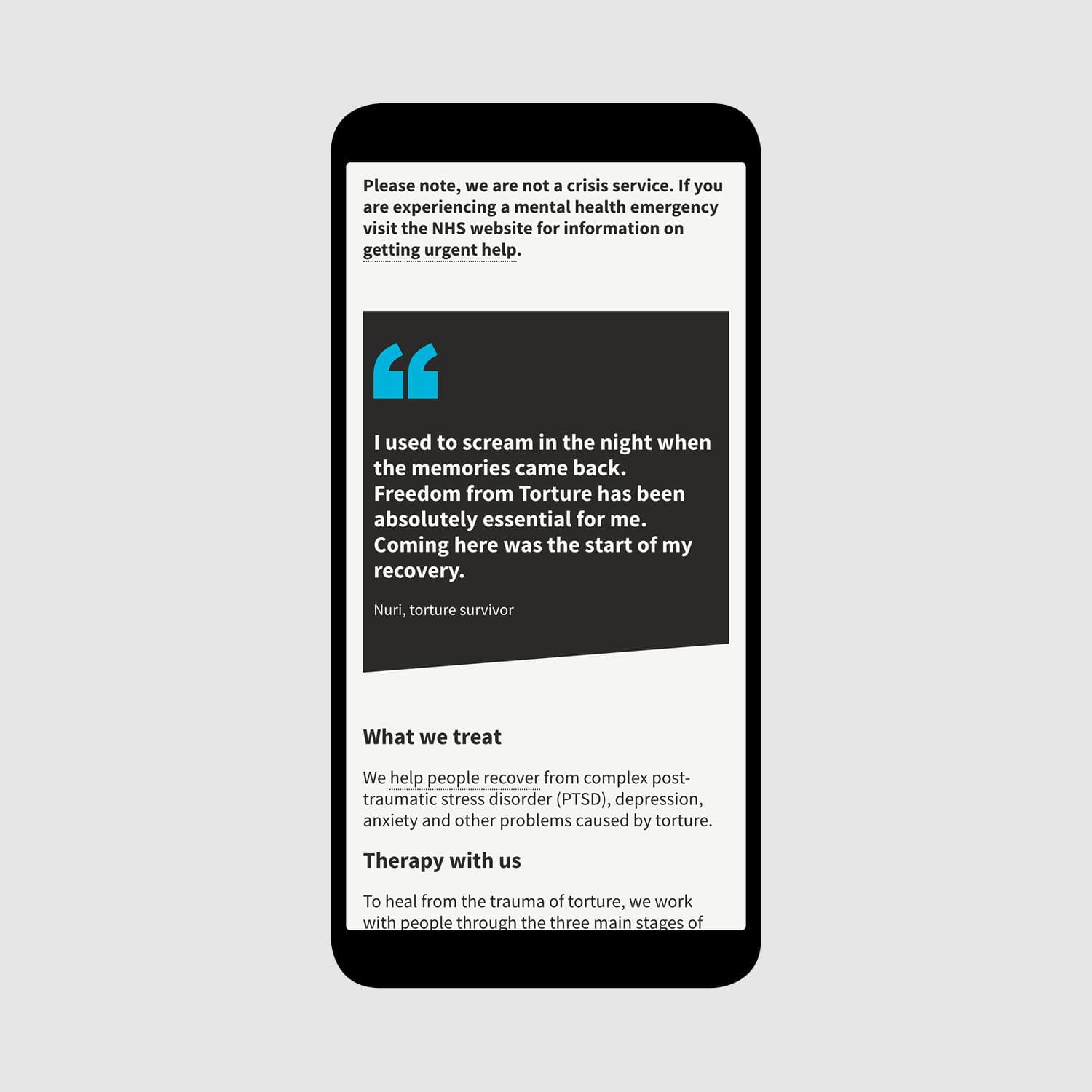