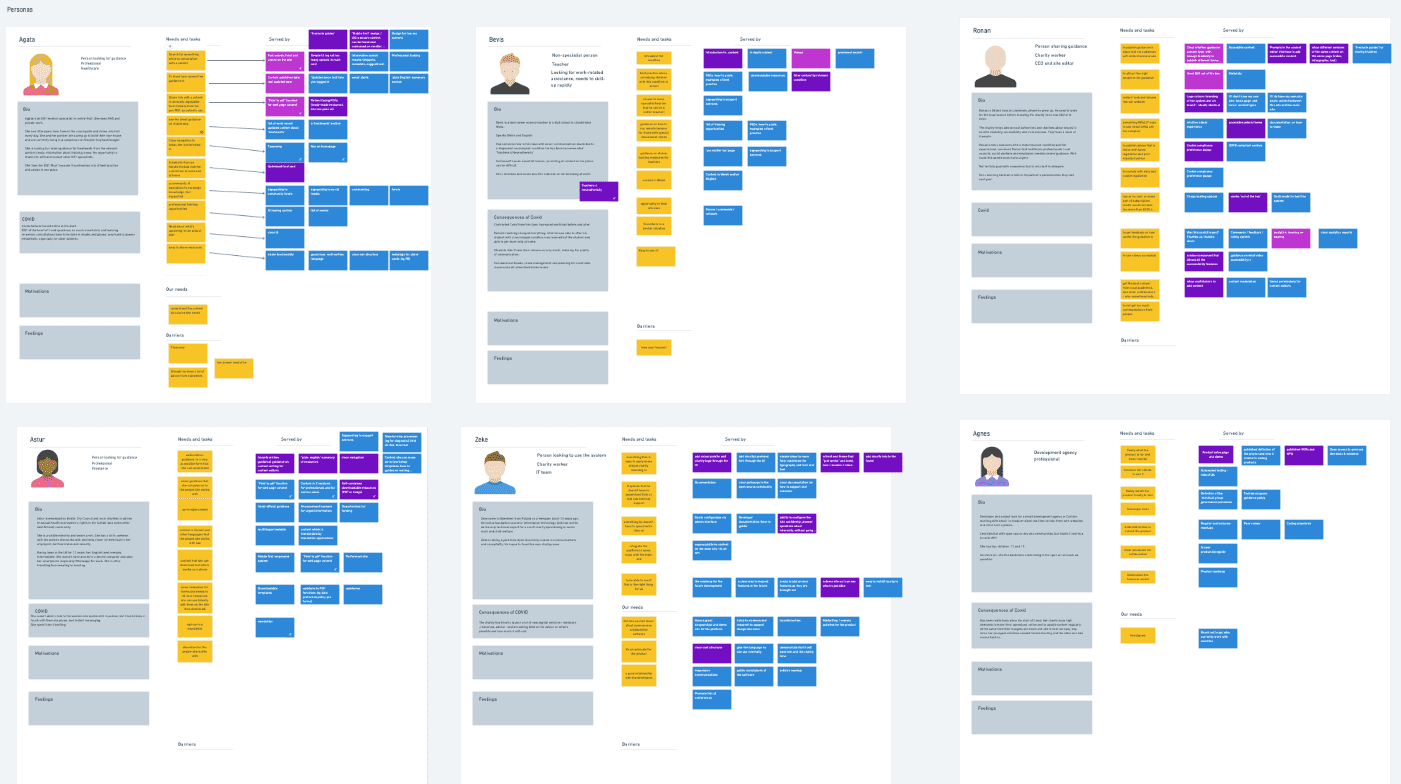 This week has seen a flurry of activity as we pushed forward on two fronts: interviews with charities and the ramping up of our design process.

To find out more about the shape of this project, we had sent out a survey to small and medium charities, hoping to find a broad range of people who might be interested in using this product in the longer term.

We’ve had fewer respondents than we hoped, which isn’t surprising given the short turnaround, but we’ve learnt a lot already from those who have responded.

We’ve had two follow up interviews with respondents, and have more lined up early next week. These interviews allow us to hear more about the charities, and their hopes, dreams and needs for the future.

We know that the end-users of the guidance might be teachers, health professionals, therapists, social workers. We know that some of the charities have very limited resources to put into hosting and upfront costs, or time for updating content. Though the content is usually updated infrequently, COVID-19 meant a lot of guidance needed reviewing by already over-stretched content editors. We know that people want to publish guidance in a range of formats - multimedia and web-based content, as well as physical, printable leaflets and posters.

We look forward to finding out more…

Based on the information we collected in previous weeks, the project team outlined all possible users for the platform we are developing and then used affinity sorting in order to reduce them into sets of related needs. We ended up with twenty-nine groups in five sets:

These are descriptions of user motivations, needs and difficulties in the form of fictionalised pen portraits of key audience members. 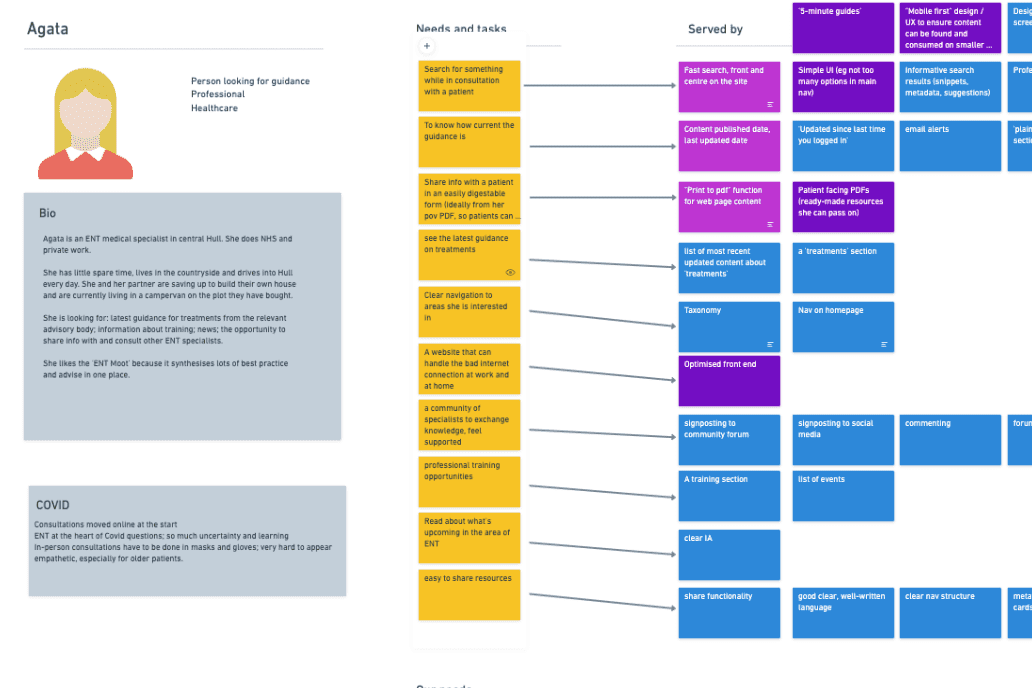 A close up of our user persona Agata, our healthcare professional seeking guidance in the workplace

The original plan was to collaboratively create user journey maps for each persona in order to expose pain points and areas for exploration. However, time constraints meant that we instead generated ideas for addressing their needs within the persona board itself. We arranged our needs and tasks for each user persona in a column, ordered them by priority, and then brainstormed solutions alongside under the heading “Needs served by…”

By doing this we identified almost a hundred different ideas, which we reduced down to a more manageable set through a crude prioritisation process. We consulted the Theory of Change board and then went through the list of ideas selecting our fifteen highest priority items each. Duplicates were allowed.

Terrible buzzword it might be, but we embrace the concept of ‘ideation’! It allows us to get together and sketch solutions, compare what we’ve done and then combine the best of the ideas. We did it on paper and held up our sketches to the camera, noting down the different elements suggested. 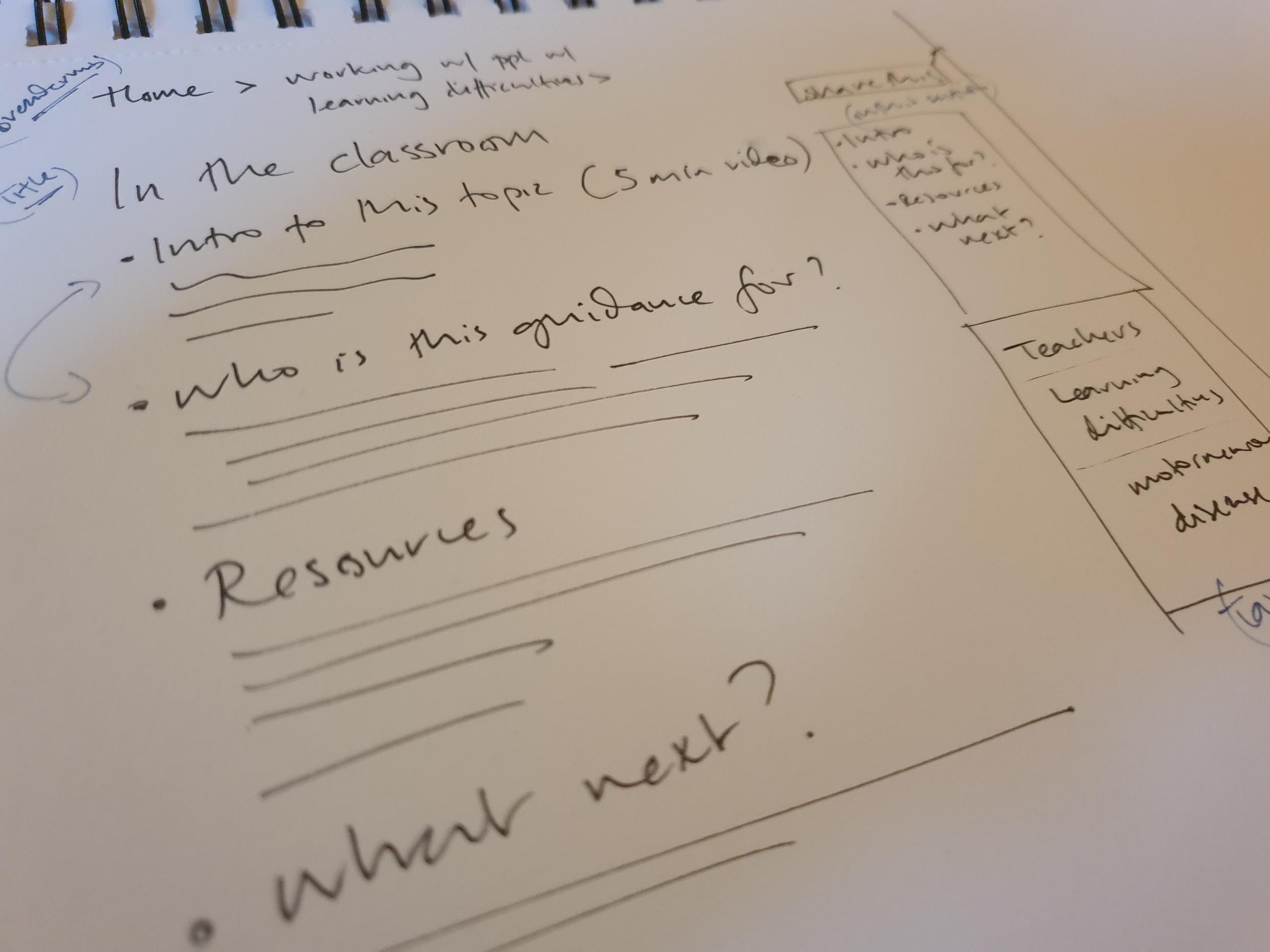 A sketch for a guidance page and navigation

Incorporating the research into the design process

Running the design phase and the research alongside one another isn’t ideal, but it works. Our initial personas are based on the information we had already gathered, talking to CAST, and insights from our years of experience working with charities who need to share greater or lesser amounts of guidance. These then are ‘straw’ personas, ready to be blown down by evidence.

As we receive the results of the user surveys and conduct the user interviews, we feedback real comments and expressed needs and difficulties into the personas, and create more if necessary.

For instance, we had assumed that ‘People looking for guidance’ were primarily professionals but our early interviews made it clear that even professional guidance repositories often also have a very engaged non-professional audience, including parents, family members, and teachers.

Our interviews also highlighted the financial barrier to uptake for many smaller charities, leading to our to prioritising those solutions.

We have an exciting week lined up next week, with some intensive internal workshops generating the prototype of the guidance repository. We’ll then test the prototype with our users and hear their feedback. This will allow us to move into building the alpha product the following week knowing that we’re on the right track.

The term “guidance repository” remains contentious. We continue to search for an alternative.

Our draft MVP requirements
Back to blog